Things holding their own

Mason at the hospital yesterday with one of the therapy dogs 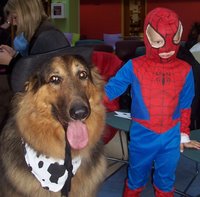 We had a good clinic visit yesterday. No transfusion and he is feeling pretty good even though his white blood cell count is zero. He went to school Tuesday and Wednesday, which he loved. We'll keep our fingers crossed for no fevers this weekend and get ready for Halloween.
Posted by Danielle,Kirk and Mateo Leach at 11:01 AM 2 comments:

Last week we had the fourth round of chemo. This is a different type of chemo. It is two days of carboplatin and thiotepa, a day of rest and then the stem cell transplant. It was less intense in terms of vomiting for him. The interesting thing is you have to bathe him every four to six hours in order for the chemo not to sit on his skin. It can cause sores and a burn. So Mason was the cleanest boy on the planet last week. He has had some more post chemo vomiting every day. We were in a restaurant the night he was released and the smells bothered him and he threw up all over. You have to have a good sense of humor about it all. He was pretty mad he couldn't eat his pasta and we had go home and shower.
Otherwise, we are all doing fine. Mason played in his soccer game yesterday. Mateo scored three goals at his game. Mason will go to school again later this week when his counts are back up. He is very excited about it and there are a few boys from his soccer team in his class. He did experience someone making fun of him being bald at his soccer game this week, but he recovered quickly, especially when Mateo told him some kids are stupid. Good to have a big brother to defend him.
So this week will be just watching his blood counts and a clinic visit on Thursday if he has no fever. We should be home most of the week.
Posted by Danielle,Kirk and Mateo Leach at 8:06 AM No comments:

We reviewed the final results with Dr. Rood yesterday. The preliminary results were confirmed - the cancer has retreated and cannot be seen. Mason still has the spot on his lung, which was originally found when he had the MRI after the tumor resection. The spot is not cancer, but may be from an infection he may have had some time in the past. It is about 9 millimeters across. It may have grown by a millimeter or so since the last MRI, so they are looking at it closely. If it has grown due to him being immunosupressed, it may mean that it is an active infection, in which case it will need to be taken care of before he gets any more chemo. If it is determined that it has not grown then it is probably just something left over from the past, and the 4th round of chemo will proceed next week. They are making the determination this morning.

So the final results were great! Dr. Rood confirmed that they are "optimal".

Mason has his first day of class at his new school today - just happens to be a field trip! Tomorrow he has his first soccer game. We will try to put some video on youtube.com. Look for the URL here on Sunday or Monday.
Posted by Danielle,Kirk and Mateo Leach at 7:46 AM No comments:

Since Mason was already an inpatient, they decided to go with the "mid-term" MRI today to see how the chemo is working.

The preliminary results were excellent! There is no evidence of the original large tumor, and the multiple small tumors (which the doctors had described as "paint drops" on the original MRI) are all gone. There was a question about one of the smaller ones - they couldn't quite be sure it was gone, but they think so. We will have final results on Monday.

So we are going in the right direction, and hopefully the last three rounds of chemo will kill the last vestiges of cancer, if any still exists.
Posted by Danielle,Kirk and Mateo Leach at 2:28 PM No comments:

Mason is in the hospital with a fever. He went in on Tuesday and has receieved antibiotics and some more transfusions - his hemoglobin and platelets were low. They have moved his MRI that was planned for the 11th to today to take advantage of the easier logistics while he is admitted. He has had no fever for over 24hours and hopefully will be released by Friday. He is in good spirits overall and anxious to get back home.
Posted by Danielle,Kirk and Mateo Leach at 2:25 AM No comments:

One of the last days in the hospital with the family

Mason is home so far and doing well. He went in for blood work today and his hemoglobin was low so he got a tranfusion. He was happy when they told him he could go home and the nurse gave some candy to him as a send off. So now we just enjoy what time he is at home. My friend Mary came down this weekend and the boys had a wonderful time. Mason insisted Mary sleep in the room with him on the trundle bed. 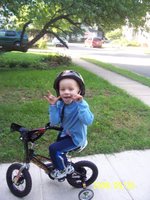 Mason on his new bike

Keep in mind to donate blood if you can. They always can use it and Mason certainly does often. We appreciate it.

Posted by Danielle,Kirk and Mateo Leach at 3:54 PM 1 comment: 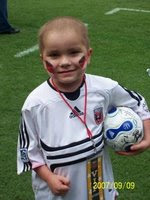 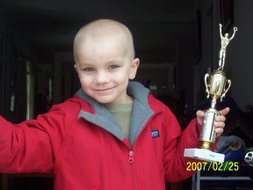